When UL issues a variance there can be a very real and immediate costs in terms of withheld certifications and delayed shipments1. But beyond the initial sting, I’ve come to learn that there can be a bit of a blood-in-the-water effect.

To this day, I’m still not sure whether they were skirting their UL Labeling requirements out of costs savings measures or confusion, but this company–let’s call the XYZ Industries–is now paying for their crimes against UL. The first time I encountered XYZ Industries, they sent me a nondescript email looking for UL Labels. Only after some prodding and couple of calls, did I learn that they had been using the wrong labels (basically non-UL 969 labels).

Taking in the important and relevant information, I helped them figure out what they needed and got them up and running with the correct labels. Case closed..or so I thought. 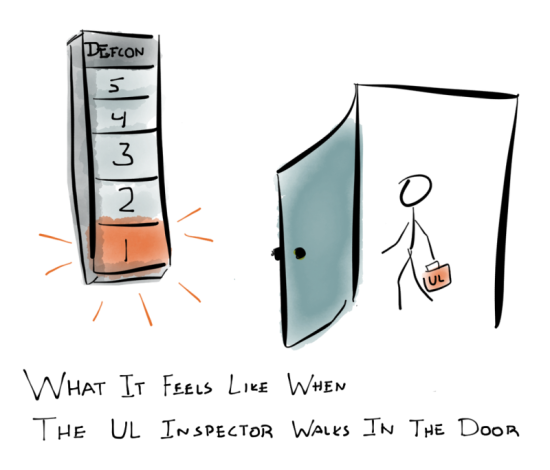 They called up a couple weeks later in a panic because the UL inspector, “…WAS HERE.2” Now my own experiences working with UL inspectors is that that they are thorough, but altogether reasonable people.  Typically if a company’s products are up to code, they check what they need and move on. In this case however, because of the previous infraction(s), the inspector is digging deeper. Basically where there’s smoke, there is probably a fire, and so he’s doing his job and asking all the tough questions.

This story is called Crime & Punishment. Why? Because a year and a half later, they are still the most scrutinized client I have ever worked with. You can hear the fear in their voices whenever they mention the UL inspector. It’s as if the whole company goes to DEFCON 1 when the inspector walks in the door3. So far whenever their inspector has needed additional documentation, I’ve been able to handle it, but that’s no the point. The point is he’s looking harder and longer–with good reason–because of their past crime. As a result. their punishment ends up being all the extra time and energy they expend answering all these questions.

The moral of the story? Sweat the details. Sure a label may not seems significant in the grand scheme of your product, but if you ignore the requirements it you’ll make it more difficult for yourself down the road.

About The UL Label Guy

Having grown up in and around the label industry, I have a healthy appreciation for all types of labels and stickers. That said, as someone who loves details, the precise requirements of compliance labels fit right in my wheelhouse. As a result, I have had the opportunity to design UL labels for everyone from small start-ups all the way to Fortune 50 companies.
View all posts by The UL Label Guy

I currently work with the team at Coast Label Company managing their UL Program. Feel free to reach out and see how my team can help with your compliance labeling application. Email us at ulexperts@coastlabel.com or fill out Coast Label's Request-A-Quote form.